William Tunberg is a fine artist based in Venice, California.  Tunberg specializes in marquetry sculpture, furniture and portraits, and has been actively producing artwork for over 50 years.

Tunberg pioneered the use of marquetry in abstract expressionism and fine art sculpture.  Marquetry is an art form that spans back to the ancient Egyptians.  During the time of Louis XIV, marquetry was the most highly prized of all arts.  Now, in the 21st Century, what was once a revered and popular art form is rare and nearly extinct.  Except for its logistical complexities, Tunberg's use of this classical technique has little in common with traditional marquetry.  Using exotic natural and dyed veneers, Tunberg fragments and reassembles imagery into narratives of his personal experiences; he then laminates these narratives over complex sculptural forms.  Often mistaken as paintings, Tunberg’s modern marquetry brings this ancient art form into the contemporary age.

Most of Tunberg's sculptural furniture is created by commission only.  Tunberg creates works for religious institutions, universities and businesses.  When creating religious pieces, Tunberg immerses himself in the art, architecture and writing of the religion to establish a foundation of historical authenticity.  Materials vary.  At times Tunberg uses solid exotic hardwoods, and other times he covers his furniture with marquetry.

Tunberg's sculpture is influenced by his fascination with narrative art.  In the 1960's, Tunberg discovered the works of Cliff Westerman and Joseph Cornell.  Their assemblage was so powerful that he was captivated by the narrative quality of this art form.  Assemblage art seemed to be the natural three-dimensional extension of surrealism.  After graduating from USC, Tunberg worked for Ed Kienholz and they became friends.  Westerman, Cornell, and Kienholz are the inspiration behind Tunberg's early assemblage.  When Tunberg began using marquetry in assemblage, it quickly became his dominant medium, as marquetry is unrivaled for sheer beauty and visual drama.

Tunberg's love for drawing the human form is an irrepressible force in his life.  Working in pencil, charcoal and watercolor, Tunberg's drawings, which are 3/4 life sized, depict the intricate details of the human form juxtaposed against a stark, white background, producing a dynamic interplay between positive and negative space. 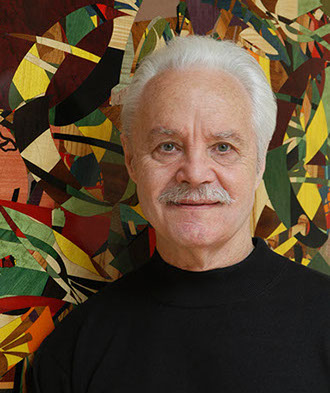